During a tweetstorm, Elon Musk has removed both of his companies’ Facebook pages after being challenged to do so by a few of his followers. The pages of both SpaceX and Tesla are now inactive. Each had around 2.6 million followers.

Musk was answering a flurry of tweets this morning when he responded to one from Signal’s Brian Acton, co-founder of the Facebook-owned WhatsApp, that contained the hashtag #deletefacebook. “What’s Facebook?” Musk queried. Afterward, a follower told Musk he should delete SpaceX’s Facebook page if Musk was “the man.” Musk claimed he didn’t even know it existed and then said he would, probably in an attempt to preserve his “the man” status. 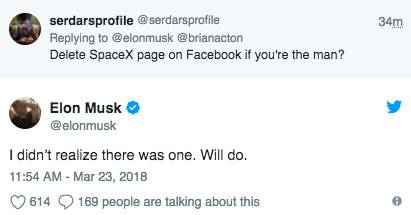 Things ballooned from there. After someone showed Musk a screengrab of the SpaceX Facebook page, he noted it was the first time he had seen it and that it would “be gone soon.” Then someone prompted him to delete Tesla’s Facebook page, with Musk responding that it “looks lame anyway.” And just for good measure, it seems that the Facebook page for Tesla-owned Solar City has disappeared as well.

Musk’s massive Facebook troll comes on the heels of a particularly bad week for the social media company. Over the weekend, it was revealed that Cambridge Analytica, a consulting firm that worked on President Trump’s election campaign, had improperly acquired data from 50 million Facebook users. The backlash has continued since then, with Facebook users showing concern over the disregard for their privacy and government officials demanding answers.

Despite the anti-Facebook stance Musk is taking, SpaceX and Tesla are still alive on Instagram, which is owned by Facebook. Perhaps Musk will shun that platform, too — if he is the man.